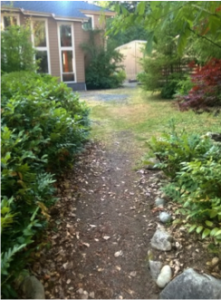 When I first heard about Buddhist Recovery, it was just after a visit to Seattle by
Kevin Griffin, promoting his new book “A Burning Desire”. There were several
people at his talk that wanted to start support groups for people integrating their
Buddhist paths with their recovery programs. Through these meetings, I became
aware of the Buddhist Recovery Network, a website with listings of Buddhist
Recovery meetings around the world. On that website, I found (as far as I knew) the
first Buddhist Recovery meeting in Seattle – located in a gorgeous wooded setting in
Woodinville, WA. I also at this time was introduced to Rev. Alex Holt, who was
working on an article of suggested revisions for “How It Works” from the AA big
book, as a means to create more inclusive and gender neutral language. I invited
Rev. Holt to come and speak to our Buddhist Recovery group, Buddhadharma
Meditation & Recovery in the summer of 2011 and began to attend his Woodinville meeting, which by that time was being facilitated by Mark H., as Rev. Holt moved on to continue his ministerial education, maintaining his role as advisor to the Buddhist Recovery Network. I spoke to both Rev. Holt, and Mark H. about what it was like to have the “only Buddhist Recovery support group in town” and to sustain it as the “longest running” group.

NWBR: I am really interested in what it was like for you (Rev. Holt) starting a Buddhist Recovery
meeting when the idea of Buddhist recovery was so new and controversial. What kind of feedback did you get from the “traditional” recovery community?

REV. HOLT: “I started meetings partly as a result of Kevin’s work which at that time was pioneering in the field. The traditional AA community was – as I expected – divided into the ‘orthodox’ who wanted nothing to do with such a group and had no desire to know more or have any flyers given out. Others were interested but I think the most common response was the ‘if it’s not broken don’t fix it’, ignoring the reality that AA is in fact broken for many people. I don’t know how Mark promoted meetings but I did so mostly word-of-mouth. At the time Kevin’s first book had come out there was little work within the Buddhist community about addiction and recovery. My sense was that, as in the rest of society, there was great discomfort in talking about addiction. I was invited to attend the first Buddhist Recovery Network conference and learned more of what Noah was doing (and I had attended one of his retreats). Later on more books came out- thanks in part to the work of Prof. G. Alan Marlatt at U.W. on mindfulness and addiction recovery. Some were quite good and others profoundly confusing. I knew there was an interest and a need for books and groups that would be a hybrid of the 12-step model and /Dharma teachings and was also interested in seeing AA move out of its’ 1930’s Protestant mind-set.”

NWBR: Did you get a sense back then how widely this would be embraced by the growing community of recovering addicts who were exploring Buddhist teachings?

MARK H: “Initially, as the only Seattle area meeting listed on the Buddhist Recovery Network web site, I used to get regular emails from people asking if there were any meetings in Seattle. “Unfortunately not,” I’d say, “but feel free to start one!” Eventually, Kevin Griffin wrote a second book, “A Burning Desire”, and came back on another book tour. We had another retreat, this time at Nalanda West. Several new meetings sprung up in Seattle out of this visit from Kevin. He’s like the Johnny Appleseed of Buddhist Recovery!

Over the last 10 years we’ve seen many people come and go. Some come for only a single meeting, some come for a few, some come sporadically and some are there nearly every week. Today, we regularly have around 10-15 people in attendance. We’ve had people in recovery from most every addiction you can think of, and we have some Al-Anons who are regular members. It’s been a very rewarding journey, which is why I continue to be “the guy with the keys” to this day. We have even inspired another group to start. There will soon be a Women’s Buddhist Recovery group starting at WUUC!”

NWBR: How did you (Mark) become involved in facilitating the “Sit Happens” meeting, and how do you see it growing with the current blossoming of interest in Buddhist Recovery support groups?

MARK H: “The meeting started as a result of Kevin Griffin’s first book tour for One Breath at a Time. As the minister of Woodinville Unitarian Universalist Church (WUUC), Alex hosted Kevin for a day retreat at the church, which I attended. After the retreat, Alex started a small meeting with several interested folks in his office, I think we met every other week. We would meditate, then read from Kevin’s book and discuss the material. Often, we would only read a single paragraph at a given meeting and have a lot of discussion. It was during the course of this meeting that my commitment to a Buddhist path really solidified. I felt I had reached a plateau with AA and the Buddhist path offered a vast new area for exploration of my spirituality. Everything I read or heard about Buddhism rang so true for me.

After Alex left WUUC for greener pastures, I decided to try to keep the meeting going. I remember many times being the only person to show up. I would sit for about 20-30 minutes and if no one showed up by then, I’d leave. I actually found the practice of just showing up to be very beneficial. I secretly sometimes wished that no one would show so I could have my own personal meditation time. Gradually, some folks started to show up more regularly. We had a core group of about 3 or 4.

Eventually, we started meeting weekly. I think this move really helped to create a core group of members who attended on a regular basis. Together, we decided that we liked the sort of preamble we saw at AA meetings. It served as a time to orient everyone and get focused on why we were there. So we created our own version of a Buddhist meeting format. We now use this format for all our meetings, allowing anyone to facilitate the meeting so we aren’t relying on the same person every week.”

NWBR: How do you feel about the discussion of the integration of Buddhist principals and meditation with 12 step programs, as opposed to new Buddhist recovery programs being developed by Vimalasara (Eight Step Recovery) or Noah Levine (Refuge Recovery)?

REV. HOLT: “I think all the options out there to use various combinations of Dharma teachings with 12 Step, SMART and other models of recovery all work in useful ways. When I was involved with BRN I suggested that Dharma centers be encouraged to talk about addiction and recovery, and then to encourage groups. One important reason I think the 12 Step model hybrid works is that Kevin told me once that Jung had said the 12 Steps were an archetypal spiritual path to wholeness. That in turn led me to read Christina Grof’s book “A Thirst for Wholeness” that I heartily recommend. The idea of one ‘best’ way to tackle addiction or
craving is unrealistic. A whole variety of approaches works much better.”

The meeting begins with introductions and a brief moment of silence, followed by their Buddhist version of the serenity prayer. They then do a check in, read from the current book selection on Buddhism and recovery, and go into a 20 min. silent meditation (with brief guidance). After the meditation period, there is open discussion about the reading, and, if there is time, a final 5 minute meditation. They end the meeting with a dedication of their practice. This meeting follows suit with other Buddhist recovery support groups in asking that the speaker identifies him/herself by name only, so as not to identify with their particular addiction, promoting the ideal that we are all seeking to end our suffering.

Promises of Meditation
If we meditate patiently, our distracting thoughts will gradually subside and we will experience a sense of deep relaxation. We can see from this practice that it is possible to enjoy inner peace just by controlling the mind, without having to depend upon external conditions. When the turbulence of distracting thoughts subsides and our mind becomes still, happiness and contentment naturally arise from within. These feelings of well-being help us to cope with the difficulties of daily life. Much of the stress we experience comes from our mind. Many of our problems are caused by this internal tension. Just by doing breathing meditation for a few minutes each day, we can reduce stress. Difficult situations will become easier to deal with. We will naturally feel warm and well disposed toward other people. Our relationships will gradually improve.

A Buddhist Serenity Prayer
May I be serene, accepting those things I cannot change: the Four Noble Truths, impermanence, dependent
origination, not self, and past karma.

May I be courageous; changing those things I can by being mindful in the present moment so that my thoughts, words, and actions will bring greater joy and not harm myself or others now or in the future.

May I be wise, knowing the difference between skillful and unskillful action.

Dedication of Practice
We dedicate the merits of this practice to all suffering addicts and those who love them.

Don’t just do something, sit there.